4 Must Have January 2022 New Releases

Get ready because we're about to introduce you to 4 must-have books for your TBR!

A trope-inspired YA anthology, a swoon-worthy love triangle, an enemies-to-lovers hockey romance, and a twisty historical thriller, oh my! Today we’ll be taking a look at four amazing novels that came out this past month.

There’s something for everyone in each of these stories, so keep reading for the full list of books to add to your TBR this month! Serendipity Edited by Marissa Meyer Release Date: January 4, 2022 Love is in the air in this is a collection of stories inspired by romantic tropes and edited by #1 New York Times-bestselling author Marissa Meyer. The secret admirer. The fake relationship. The matchmaker. From stories of first love, unrequited love, love that surprises, love that’s been there all along, ten of the brightest and award-winning authors writing YA have taken on some of your favorite romantic tropes, embracing them and turning them on their heads. Readers will swoon for this collection of stories that celebrate love at its most humorous, inclusive, heart-expanding, and serendipitous. A sparkling YA debut rom-com about a popular high-school girl, her ex-boyfriend-turned-best-friend, and the girl they both fall for—perfect for fans of Becky Albertalli or Casey McQuiston. Sam Dickson is a charismatic actress, ambitious and popular with big plans for her future. Ros Shew is one of the smartest people in school—but she’s a loner, and prefers to keep it that way. Then there’s Christian Powell, the darling of the high school soccer team. He’s not the best with communication, which is why he and Sam broke up after dating for six months; but he makes up for it by being genuine, effusive, and kind, which is why they’re still best friends. When Christian falls for Ros on first sight, their first interaction is a disaster, so he enlists Sam’s help to get through to her. Sam, with motives of her own, agrees to coach Christian from the sidelines on how to soften Ros’s notorious walls. But as Ros starts to suspect Christian is acting differently, and Sam starts to realize the complexity of her own feelings, their fragile relationships threaten to fall apart. This fresh romantic comedy from debut author Rachel Roasek is a heartfelt story about falling in love—with a partner, with your friends, or just with yourself—and about how maybe, the bravest thing to do in the face of change is just love somebody. Icebreaker by A. L. Graziadei Release Date: January 18, 2022 A. L. Graziadei's Icebreaker is an irresistible YA debut about two hockey players fighting to be the best—and the romance that catches them by surprise along the way. Seventeen-year-old Mickey James III is a college freshman, a brother to five sisters, and a hockey legacy. With a father and a grandfather who have gone down in NHL history, Mickey is almost guaranteed the league's top draft spot. The only person standing in his way is Jaysen Caulfield, a contender for the #1 spot and Mickey's infuriating (and infuriatingly attractive) teammate. When rivalry turns to something more, Mickey will have to decide what he really wants, and what he's willing to risk for it. This is a story about falling in love, finding your team (on and off the ice), and choosing your own path. 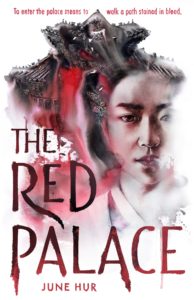 The Red Palace by June Hur Release Date: January 25, 2022 June Hur, critically acclaimed author of The Silence of Bones and The Forest of Stolen Girls, returns with The Red Palace—a third evocative, atmospheric historical mystery perfect for fans of Courtney Summers and Kerri Maniscalco. To enter the palace means to walk a path stained in blood... Joseon (Korea), 1758. There are few options available to illegitimate daughters in the capital city, but through hard work and study, eighteen-year-old Hyeon has earned a position as a palace nurse. All she wants is to keep her head down, do a good job, and perhaps finally win her estranged father's approval. But Hyeon is suddenly thrust into the dark and dangerous world of court politics when someone murders four women in a single night, and the prime suspect is Hyeon's closest friend and mentor. Determined to prove her beloved teacher's innocence, Hyeon launches her own secret investigation. In her hunt for the truth, she encounters Eojin, a young police inspector also searching for the killer. When evidence begins to point to the Crown Prince himself as the murderer, Hyeon and Eojin must work together to search the darkest corners of the palace to uncover the deadly secrets behind the bloodshed.
Previous Post Take a Sneak Peek of Our Most Anticipated Books of Winter 2022
Next Post January 2022 Read Fierce Book Club Pick